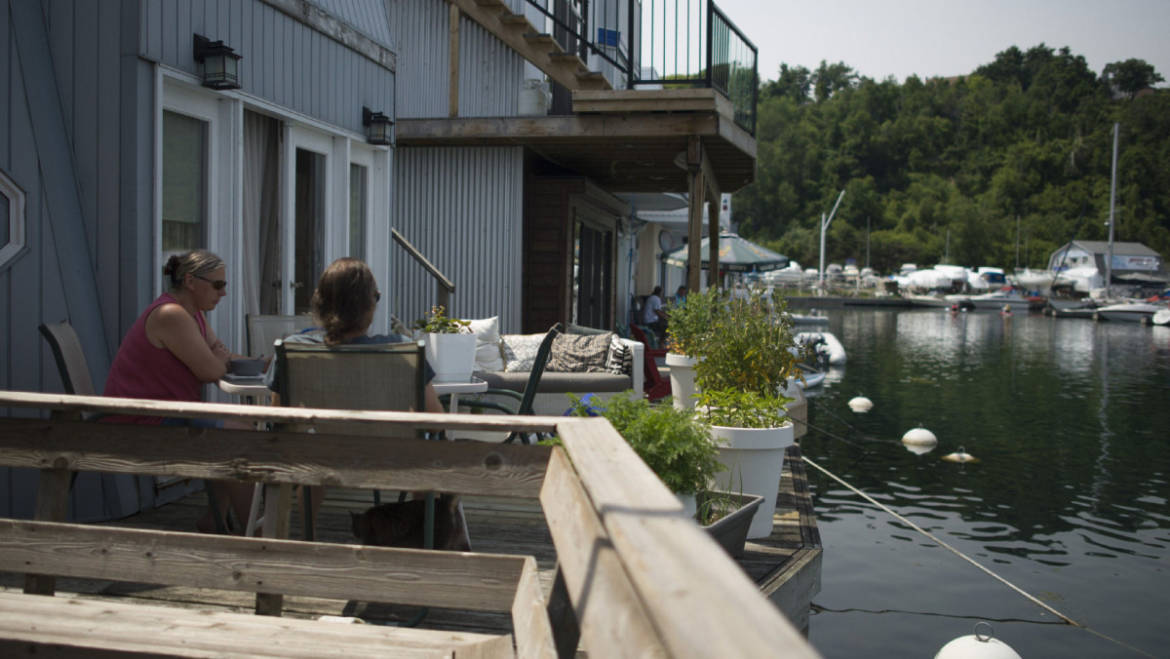 Turn off Kingston Rd. southbound onto Brimley Rd. and something magical happens.

The six lanes of traffic bordered by strip malls melt away, replaced by a steep, winding downhill road surrounded by woodland.

The serpentine descent spills out onto the shores of Lake Ontario, a lush spit of parkland tucked in beneath the windswept Scarborough bluffs.

On a sultry summer evening, the grassy slopes of Bluffer’s Park teem with picnicking day-trippers, lazing on the grass, clustered around picnic tables covered in checkered tablecloths and tending to charcoal barbecues belching smoke.

At the water’s edge, kids splash in the surf and a teenager impales a worm on a fishing hook. Jet skis growl across the lake, tossing up swells for paddleboarders to ride.

But what you won’t see, unless you know where to look, is the small community that lives on the water, year-round.

Twenty-four houseboats are moored in a row on the southwestern end of Bluffer’s Park Marina, a tight-knit community of retired professionals, artists, nature-lovers and water sports enthusiasts nestled in a cove at the base of the bluffs.

A tight-knit community of 24 floating homes is nestled in Bluffer’s Park Marina at the base of the Scarborough Bluffs. 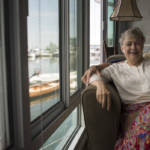 Mickey Mehal and Brian Wilson have lived in a floating home at Bluffer’s Park Marina since 2001. 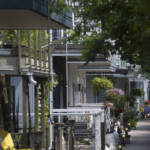 Gardens growing on the houseboats at Bluffer’s Marina. 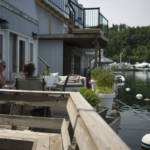 Living on the water at Bluffer’s Park Marina.

“We thought, how much more on the water can we be than this?” says Mickey Mehal, 69, sitting on a loveseat in her sunroom.

The room rocks gently on the swells of a passing motorboat. Ducks preen on the mooring lines that anchor the floating home in about 5 metres of water.

Mehal and her husband, Brian Wilson, have lived at the marina for more than a decade, part of the original wave of buyers who moved into the houseboats in 2001.

“We lived in a semi-detached house and we were looking to downsize. We were looking at some places on the waterfront, and the places we looked at that we could afford were a real mess, or had no view at all of the water,” says Wilson, 67.

Now, water is the first thing they see when they wake up every morning. The master bedroom on the second-storey — well, second deck, nautically speaking — overlooks the sailboats berthed in the marina.

On the top deck, an assortment of Muskoka and lounge chairs sit in the open air. All told, the 1,200-square-foot living area includes two bedrooms, two bathrooms, a kitchen, adjoining dining area, and the sunroom, which also serves as a breakfast nook, den, and all-around living space.

“One thing we’re short on is storage,” Wilson notes: they lack a garage, basement or attic. “You’ve got to be pretty strict with yourself, with what you do decide to keep.”

The houseboat is named Morecambe and Wise One, an homage to Wilson’s hometown in Lancashire, England and an obscure reference to a British comedy duo.

Technically, Wilson says, the vessel is a barge, as it lacks an engine. The 24 crafts were constructed at Cherry Beach and towed over to the marina, where they are moored year-round — yes, even in the winter.

“That’s always the question people ask when they hear you live year-round — well, how is it in the winter?” Mehal says.

The couple says the weather isn’t as bad as you might imagine. The towering Scarborough Bluffs protect the inlet from northerly winds, and the man-made breakwater to the south shields the marina from large waves during storms. When the lake freezes, they shovel snow off the ice and turn their backyard into an enormous outdoor skating rink.

Like many, they were without power for three days during last winter’s ice storm, but otherwise got through it without incident — “We took lots of pictures,” Wilson quips.

Most of the houseboat owners have professional backgrounds. Wilson is a semi-retired police officer who now works as a security consultant. Mehal worked as an adult educator and career management consultant, and runs a private practice helping people prepare for their retirement lifestyle.

“This is a perfect location to see clients,” she says with a laugh.

What you won’t find in this neighbourhood are many young children.

“The sense is that maybe it’s a little too risky,” Mehal said. “But we have a grandson — a 3-year-old — and you just keep an eye, that’s all. It doesn’t have to be risky.”

Between the looming grey bluffs, tranquil water and verdant foliage, it’s a picturesque spot and a popular destination to visit.

“We, as float home people, are in a lot of people’s wedding photos,” jokes Penny Barr, another houseboat dweller.

Barr, who used to work in the Globe and Mail’s marketing department, has a second boat moored at the marina which serves as her art studio.

“Every single day, I’m out here,” says Barr, sitting at her drawing board.

“It’s so visually stunning. You should see it in the fall, with the colours on the bluffs. Oh my god, it’s beautiful. It’s a very inspiring place to be,” she says.

“Can you imagine being stuck in a condo down on the waterfront right now?” asks Russ Low, sitting with a beer on his front deck on a Saturday afternoon.

A retired mailman, Low now sails a couple times a week. When he’s back on land, he maintains a terraced rock garden on the shaded embankment sloping down to his house boat.

“This is as close as you can get to having a cottage in the city,” Low says.

Wildlife abound: a beaver path emerges from under the main boardwalk. Migratory birds will flock overhead. A family of swans regularly pays the boats a visit.

“I gave up the gym membership,” says Tom Elliot, 58, who works for a Toronto ad agency and lives a few boats down from Mehal and Wilson.

An avid fisherman, kiteboarder and paddleboarder, Elliot says he loves having the lake at his doorstep.

“I come home from work, I put the boards in the water, I paddle for an hour to two hours everyday, and I went from beer belly to,” — he slaps his flat, tanned stomach for emphasis — “to getting trim.”

It’s a tight-knit community: Wilson jokes that it takes him 45 minutes to walk to the nearby marina restaurant, because he has to stop and talk to all his neighbours.

“We know everybody, and everybody knows us,” Wilson says.

“We watch out for each other,” Mehal adds.

And even though it’s less than a 20-minute drive to downtown — back up the winding hill to Kingston Rd. — it’s easy to forget you’re still in the city.