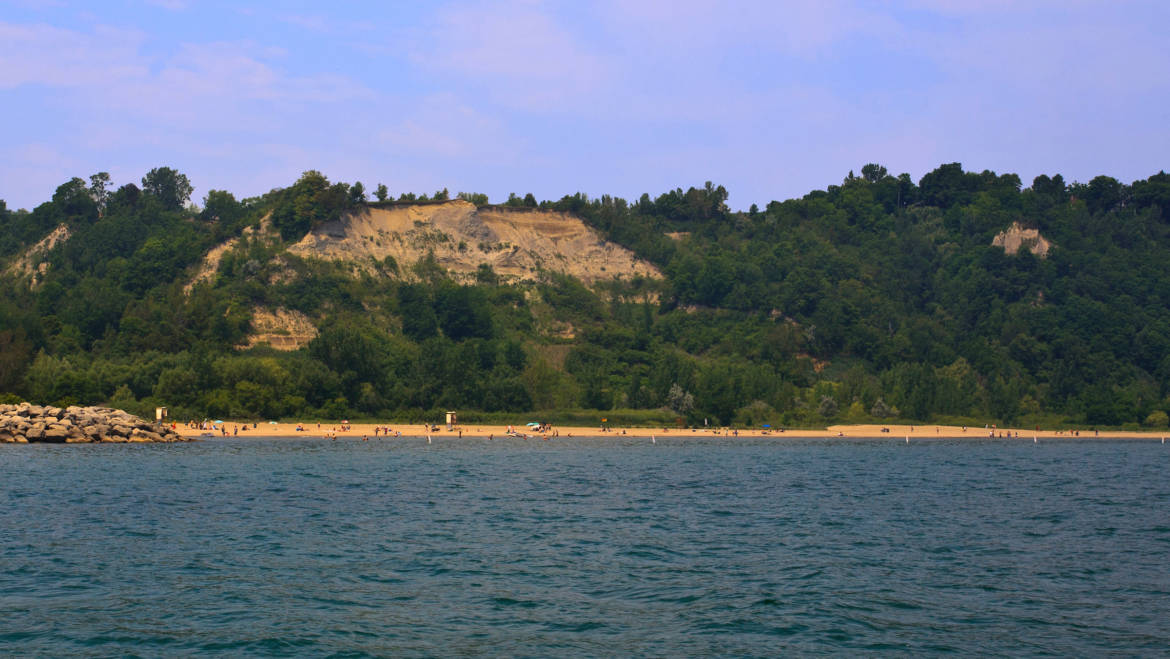 Bluffers Park is being used by record numbers of people on weekends and holidays this summer, according to Toronto Police and Toronto Parks. Drawn to Bluffer’s Beach with its fine sand and clean water, people from all over the GTA now seek refuge there from the heat and noise of the city. Easy access also adds to the area’s appeal – people can drive to, or, just this year, take TTC Bus #175 right to the water’s edge . But larger numbers of visitors to the Bluffs have created side effects. Toronto Police and Toronto Parks have both increased their presence on weekends to help control the flow of traffic and people up and down the steep Brimley Hill. Toronto Police Service now regularly stations Officers at the intersections of Brimley and Kingston Road, at the top of the Brimley Hill (Barkdene intersection), and the entrance to the beach parking lot on Saturdays, Sundays and Holidays, according to Community Services Officer Paul Rowe. Local residents are also experiencing congestion on side streets. When the Bluffers’ parking lots fill up, usually before noon on sunny holidays, overflow cars line many streets south of Kingston road, sometimes on both
sides where people have parked before walking or busing down the hill. This area of increased parking extends all the way from the bottom of McCowan Road to the south end of Midland Avenue, where visitors walk along the bluffs below the St. Augustine Seminary, sometimes climbing down to the Park from there. In the past two months, a few individuals have become stuck on the Bluffs, requiring rescue. It is important to know that anyone trespassing on the Bluffs, faces a possible fine of $ 5000. In general, increased pedestrians and vehicles slow traffic through these otherwise quiet neighbourhoods, especially along streets that do not have sidewalks. One bluffs resident has voiced concerns about the ability of emergency vehicles to navigate roadways narrowed on by parked cars. Local Councilor Gary Crawford has commented that these and other issues associated with the increased use of Bluffers Park are being given serious consideration by several departments of the City, not only Parks and Police, but also Planning and Budget. The heavy traffic is a tough problem, but one that is at issue in many cities – how to keep a beautiful area in its natural state, which is the heart of its attractiveness, and still keep it safe and accessible during increased use.

Jim Sanderson is a local bluffs resident, and the author of Toronto Island Summers, (James Lorimer, 2016).